Structural integrity and failure is an aspect of engineering which deals with the ability of a structure to support a designed load (weight, force, etc…) without breaking, tearing apart, or collapsing, and includes the study of breakage that has previously occurred in order to prevent failures in future designs.

Ultimately this is the kind of strength that is desired from our own bodies. Everyone would like to have a body that easily carries its own weight with ease and comfort. In Kung Fu terminology this is referred to as a ‘light’ body. It does not mean that the body weighs less, just that it feels like it weighs nothing to the person carrying the body.

To explain how this is achieved in Kung Fu, let’s first take a look at a familiar structural example, a bridge, like the one in the picture below.

If any element of this structure was either out of alignment or the wrong length, the overall structure would become less efficient and would be able to carry less weight. As an example, let’s take one of the cables in this bridge and shorten it, see the picture below.

Now let’s look at these ideas for the human body. In our bodies the structural elements that take compression are bones, the elements that support tension are the connective tissues (tendons and ligaments). To give you an idea of how efficient these individual elements are, bones have a better strength to weight ratio than steel; animal ligaments were used to make cables for large castle siege weapons like catapults.

When the length of all the connective tissue is just right, the body’s structural integrity is at its optimal and this is when you have what is called ‘light’ body in Kung Fu. When such a body is at rest (sitting, standing, or lying down) there is very little tension in the body. It is fully relaxed while at the same time very strong. Movement is also very efficient and the body is very strong against external forces.

The images below show how a Ba Gua practitioner is able to take a pull or a push using the strength of the structure of the body. A push goes through the back leg and a pull goes through the front leg.  This does not require any muscle use, the bones and connective tissue do all the work of transferring the forces into the ground. 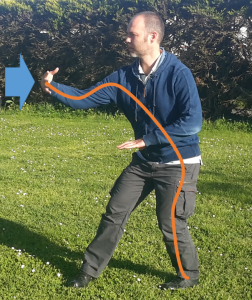 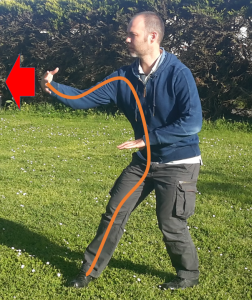 This is a very different strength than one gets from body building type of weight lifting. Weight lifting primarily focuses on muscle development that allows the body to move external weights. Often this results in unbalanced internal stresses. An extreme example of this is someone who wants to just develop huge chest muscles because they look great. Such muscles when at rest will pull the chest and shoulders forward because the muscles that oppose them, the back muscles, are relatively underdeveloped. This results in all kinds of misalignments and unnecessary tension in the body. At best, body builders attempt to develop a symmetric, balanced body. The problem is that the evaluation of this is done visually, and is not necessarily right from a structural integrity perspective. Even if the balancing of the internal forces is successful, meaning that when relaxed the muscles do not pull on the body structure, the large muscles are an extra weight for the body to bear at all times. The weight itself is not the only unnecessary load on the body, the muscle tissue has to be supplied with energy which could instead be used to maintain and develop other, more important parts of the body such as the internal organs.

The understanding of how to develop the structural integrity of the human body has been researched and developed within the Chinese martial arts culture since antiquity.  Today the state of the art of this knowledge is available through the study of Ba Gua Zhang.